The Board of IFACCA is responsible for governing the organisation in keeping with its Constitution. Board Members meet biannually to oversee the general management of business and funds, and to consider applications for membership. Board Members are elected by IFACCA’s membership at the General Assembly, which is held alongside the World Summit on Arts and Culture. More information on current and former members of the board can be found below. Director and CEO, Canada Council for the Arts

Simon Brault began his five-year term as Director and CEO of the Canada Council for the Arts on June 26, 2014. Active in the cultural sector for over 30 years, he has been a driving force behind a number of major cultural projects, most notably as Administrative Director and Director General of the National Theatre School of Canada, and as a founding member and Chair of Culture Montréal from 2002 to 2014. His first non-fiction book, Le facteur C: l’avenir passe par la culture, explains the dramatic rise of cultural concerns in the public agenda. This highly-acclaimed work was published in English as No Culture, No Future. Mr Brault has received numerous distinctions for his commitment to the social recognition of arts and culture, including the Order of Canada, l’Ordre national du Québec, and more recently the Quebec CPA Order’s prestigious Outstanding Achievement Award for bringing together ‘two worlds that were once disparate – the arts and business – an alliance that significantly benefits society at large.’

Dennis Marita is traditional Chief by birth and inheritance. He was installed chief in 1977 at a tender age of three as according to sacred customs and obligation of the Ulawa people in Solomon Islands. Education took him into the modern contemporary world and earned him a Bachelor’s Degree (BA) in Theatre Arts from the University of Papua New Guinea (UPNG) in 2001. He majors in acting and directing with a more focus on local traditional theatre. He worked with local theatre groups and cultural dance groups in Solomon Islands over the past 10 years. He spent six years as a high school teacher and of which his strong cultural background and artistic ability portrays him as one of the country’s top artistic and cultural Expressionist. He joined the government in 2008 as a Senior Cultural Officer in the Ministry of Culture & Tourism. In 2010 he was given the position of Artistic Director for the 11th Festival of Pacific Arts that was later hosted by Solomon Islands in 2012. Currently, he heads the Culture Division as the Director of Culture in Solomon Islands. 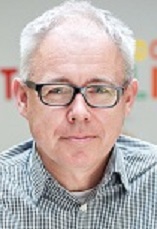 Simon Mellor is Deputy Chief Executive, Arts and Culture for Arts Council England. He is a member of the ACE Executive Board and has responsibility for national arts and cultural strategy. Prior to joining the Arts Council in 2012, he helped set up the Manchester International Festival in 2006 and was its first General Director. Before that he was the Chief Executive of the Lyric Hammersmith, West London’s leading producing and presenting theatre. He was also the producer founder of Gloria Theatre (an international music theatre company), Youth Arts Projects Coordinator for the Southbank Centre London, Head of Education at Battersea Arts Centre London and Co-Director of Pegasus Theatre in Oxford.

Patrick Sam is a Namibian thought leader, born and raised in a marginalised community in the capital, Windhoek. As the chairperson of the National Arts Council of Namibia, he has been driving the transformation of the Cultural and Creative Industries (CCI) in Namibia and southern Africa. Mr Sam is a development consultant, broadcasting journalist, TV anchor and arts activist. As a Fulbright scholar, he completed an MA in International Education Development from Columbia University Teachers College and a BA from University College Utrecht in the Netherlands. Along with the NACN, Mr Sam founded and hosted the first Art Summit of Southern Africa (ASSA) focused on strengthening the CCI in the Southern African Development Community (SADC) along with the IFACCA Africa Regional Chapter meeting. The platforms drafted clear resolutions intended to mainstream the CCI into key national and regional development strategies.

Nguyen Phuong Hoa has been working at the Ministry of Culture of Viet Nam for more than 15 years. She is one of the main authors of Vietnam's National Strategy on International Cultural Relations and has been actively involved in organising numerous Vietnamese cultural days abroad as well as hosting a number of international art festivals in Viet Nam. She is the national contact point for 2005 UNESCO Convention on the protection and promotion of Diversity of Cultural Expressions and has strongly supported and advocated for the National Strategy for the development of Vietnamese Cultural Industries until 2020, vision 2030. She has extensive experience in leading her team to implement cultural cooperation agreements with several countries. She also took part in the copyright negotiation for the Trans-Pacific Partnership Agreement (TPP).

She is currently Commissioner General of Viet Nam Section in Expo 2020 Dubai and also serves as Vice President of Viet Nam's Association of Film Promotion and Development. Nguyen Phuong Hoa holds a BA in International Relations (Diplomatic Academy of Viet Nam) and a MA in Cultural Policy and Arts Administration from Goldsmiths, University of London, the United Kingdom.

Adrian Collette AM is Chief Executive Officer of Australia Council for the Arts. Mr Collette held the position of Chief Executive of Opera Australia, Australia’s largest performing arts company for 16 years. He also worked in book publishing for a decade, including as Managing Director, Reed Books, a Division of Reed Elsevier. His previous role of Vice-Principal (Engagement) at the University of Melbourne included the oversight of the University’s museums and galleries and its many arts sector partnerships. He served on the Australia Council Board since 1 July 2013.

He was made a member of the Order of Australia in 2008 for service to the performing arts particularly through executive roles with Opera Australia, as a mentor to young artists, to publishing and to the community.

Rosemary Mangope is the CEO of the National Arts Council of South Africa. Her 30-year career spans the arts, business, and social and community development. Before joining the NAC, she was Divisional Executive: Communications, Marketing and Public Affairs at the Development Bank of Southern Africa, where she contributed strategic leadership and guidance across the organisation’s widespread communications and marketing initiatives. In 2009 she was Acting Deputy Director General at the Department of Arts and Culture (DAC) and, prior to that, was founder and Chief Director of the Arts, Social Development and Youth Division at the DAC in 2005. Ms Mangope holds a Masters of Social Sciences and an Honours Degree in Sociology from the University of the North West and speaks seven of South Africa’s 11 official languages.

Kajsa Ravin began her appointment as Director General for the Swedish Arts Council on March 9, 2020. Ms Ravin has been active in the cultural sector for more than twenty years and has comprehensive experience of driving cultural questions and culture policy both on a regional and national level. Prior to joining the Arts Council, she managed departments of cultural affairs in several Swedish regions and municipalities, most recently as Director of cultural affairs at Uppsala County. Ms Ravin has worked with a wide variety of cultural expressions, and she is strongly committed to making arts and culture accessible and relevant to broad audiences. She has a distinct interest in cultural diversity and audience development and has been involved in several projects about learning and education in the arts, for example the European consortium Collect and Share.

Kajsa Ravin holds a BA in Art History from University of Gothenburg.

Mr Raphael is a narrator, essayist and diplomat. He is a PhD candidate in Humanities at Pompeu Fabra University and holds a Bachelor of Political Science and Public Administration from the lberoamericana University. He has authored contributions for newspapers El País, El Universal and El Faro; the cultural supplements Laberinto de Milenio Diario and Confabulario de El Universal; and Spanish magazines including Revuelta, Gatopardo, Casa del Tiempo, Chimera and Granta. He has taught twentieth-century literature at the Claustro de Sor Juana University; and lectured in various forums on the future of the Spanish language, including the 'Amigos de espanol’ seminar at the United Nations headquarters in Vienna and the Contemporary Thought and Science Seminar in Madrid.

Mr Park joined Arts Council Korea (ARKO) as Chair Person in November 2018 and has more than 30 years’ experience working in the sector, which has been balanced between the arts and policy. Prior to joining ARKO, he was a board member of Chungbuk Cultural Foundation; a director of the Cultural Policy Network of Korea; and was a working member of the Preparation Group for Culture Vision 2020 <New Cultural Policy> with the Ministry of Culture, Sports and Tourism. From 1989 to 2018, he was an Executive Director of the Performing Art Theatre Dure Art Factory; and from 2005-2008 he served as a Council Member of Arts Council Korea. Mr Park has a distinct interest in the balance of arts practice and support, at both national and international levels.

We acknowledge with great appreciation, the many individuals who have served on the board as listed below:

On 3 December 2000, on the final day of the first World Summit on Arts and Culture in Ottawa, Canada, arts funding agencies from around the globe recommended the establishment of an international federation of arts and cultural support agencies and agreed to the establishment of an interim board.  The members of the interim board, which operated until the formal approval of the federation’s constitution and election of a board in November 2003, included the following individuals: